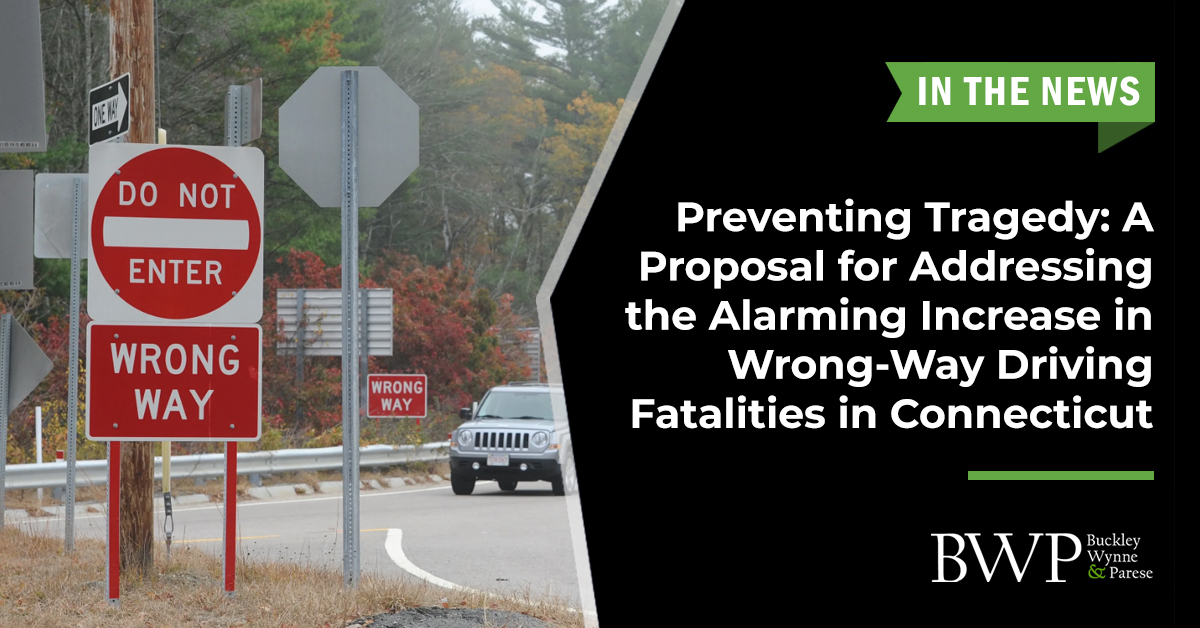 The number of fatalities resulting from wrong way driving in Connecticut has increased at an alarming rate in the past year. We must now act to prevent these senseless losses. The tragic loss of Connecticut State legislator Rep. Quentin Williams in a wrong way head-on collision will hopefully serve as an impetus to action.

In 2022 alone, twenty-three people died in wrong way collisions, skyrocketing from just four the two years prior. Less than a month into 2023, there have been three wrong way crashes. Most recently on January 15th, a wrong way driver evaded a Connecticut State Trooper in the early morning hours on I-91 as police were attempting to respond to a call. Wrong way driving is a crisis in our state that needs to be addressed.

The CT Department of Transportation (CTDOT) has stated that in approximately 80% of the wrong way crashes, the driver was impaired by alcohol or other substances. The number is likely greater than 90% due to the inability to verify blood alcohol levels in some fatalities. In many of these cases, the drivers were above a 0.20 blood-alcohol-content (BAC), more than twice the legal limit. On a national scale, this issue is correlated to alcohol impairment, as well. According to the AAA Foundation for Traffic Safety, alcohol impairment is the leading factor in wrong way crashes. Most of these accidents tend to happen during evening or overnight hours. The number of wrong way accident deaths has increased nationally in the past few years as well, with a 34% increase to an average of 500 deaths per year on U.S. highways.

Police stops and random sobriety checks must be increased to limit intoxicated drivers. Covid resulted in significantly reduced police stops and increased alcohol consumption. According to the CDC, rates of impaired driving are significantly lower in states that conduct sobriety checkpoints, and they are effective in reducing crash fatalities. By employing these stops on weekends and holidays, law enforcement can utilize this tool to prevent these accidents. The budget surplus should be allocated to municipal forces specifically for this purpose.

In addition, the state should implement additional requirements of interlock devices to prevent repeat offenders from causing these tragic accidents. Currently, the suspensions that lead to an Ignition Interlock Device (IID) are (1) failing or refusing a chemical alcohol test, (2) operating under the influence of alcohol or drugs, (3) committing vehicular manslaughter, and (4) committing vehicular assault. The National Highway Traffic Safety Administration (NHTSA) has recommended that states adopt IIDs for all impairment offenses, as the installation on an offender’s vehicle reduces recidivism of DUI offenders. Utah, for example, has some of the strictest DUI laws – the legal limit was changed to 0.05 BAC and all DUI convictions result in IIDs being installed on the offender’s vehicle. There are clear benefits for implementing a stronger IID program in CT, especially by including first-time offenders.

Third, we must increase criminal and civil liability for restaurant and bar owners. Under Connecticut’s Dram Shop law, a person or business that sells alcohol to a person who subsequently injures someone can be liable if the patron who caused the injuries was visibly intoxicated when he or she purchased the alcohol, and the person’s intoxication was a cause of the injuries. Damages in these cases are capped at $250,000. An individual who is more than twice the legal limit is almost certainly visibly intoxicated, and the state must increase criminal and civil punishments for bar owners.

Lastly, installing different signage and alert system to prevent wrong way drivers may have a benefit. In 2015, Rhode Island completed a $2 million project to upgrade the signage and apply other safety measures. Rhode Island Department of Transportation (RIDOT) has implemented motion-activated cameras and flashing beacons that trigger automated alerts to state police and DOT dispatch centers. By 2016, there was a 30% reduction in wrong way driving accidents in the state.

Recently, Connecticut has adopted a similar approach to combat wrong way driving accidents. In July 2022, the State Bond commission approved another $20 million to install wrong way driver warnings across the state, similar to those in Rhode Island. This will hopefully yield productive results, as one system that has already been installed off I-84 in Danbury has detected nearly 30 wrong way drivers and prevented any wrong way crashes since early 2020 when it was installed.

Wrong way driving must be addressed. The most recent tragedies should be a warning – we must enforce the laws as written and also implement necessary changes.