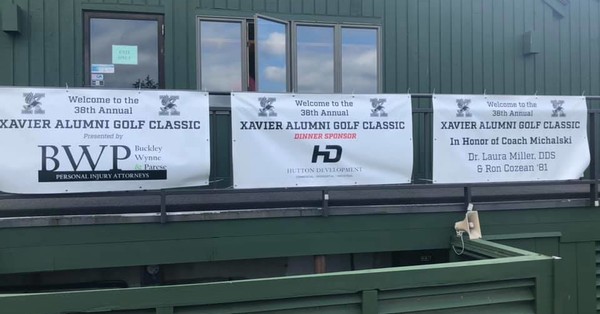 The Xavier Alumni Golf Classic was blessed with a fabulous facility, eager volunteers, players from the various decades Xavier has been in existence, and a giving spirit. Amid the challenge of the coronavirus pandemic, tournament co-directors Rich Feitel and Greg Jaskot ‘00 put together an amazing event. The weather could not have been better.

BWP was once again the proud Falcon Sponsor presenting the 2020 Xavier Alumni Golf Classic this past Friday, on September 11th.

Xavier has approximately 10,000 alumni with 7,000 residing in Connecticut. The golf committee represents a small part of the numerous alumni and friends who continue to support Xavier High School, its mission and the students.

As usual Xavier alumni and others pulled together to overcome the challenges presented by the times we are in. All the money raised from the event goes to financial aid. Last year the figure was about $75,000. Feitel announced before the tournament started that sponsorships had reached $80,000, thanking all who made it happen and the 100 golfers who came out.

This year’s honoree was truly a big shot in high school sports, even if he would not call himself that. Former Xavier track & field and cross country coach Bob Michalski, who is in the Connecticut State High School Coaches Association Hall of Fame, dedicated 39 years of his life to Xavier as a teacher and coach. His teams won 65 Class, State Open and New England titles.

The Coach Michalski Sponsor was Dr. Laura Miller and Ron Cozean’ 81, a standout athlete for Michalski. Many of Michalski’s former athletes played in the tournament and helped sponsor the event.

Before the event, Feitel called for a moment of silence on the anniversary of 9/11, also raising up Xavier alumni Peter Gelinas ‘86, who died that day in the World Trade Center.

Thank you to everyone who attended and helped make this such a special day!